Alaska visitors tend to develop an ambivalent relationship with bears. On one hand, Alaska is one of the only places in the world where you can still see bears in the wild with relative ease. On the other hand, surprising close-distance encounters with bears could be a bit nerve wracking and sometimes downright dangerous.

Here’s a quick overview of the issue, and a few tips on how to walk the line with these wonderful creatures without getting too personal.

Alaska has three bears species: polar bears, brown bears and black bears. Polar bears spend most of the year in the Arctic Ocean, and visit North and West Alaska for a short while in summer and fall. Unless you’ve come specifically for polar bear watching, you probably won’t see them in Alaska. In recent years, the town of Kaktovik has been gaining reputation as the best location to see these guys in Alaska. The best season to see them is typically during late fall, in September and October.

Brown bears, unlike polar bears, are found throughout most of Alaska. Those who live in coastal areas enjoy the abundance of salmon in the rivers, and are consequently larger than bears that live far from the coast. Contrary to the lower 48, in Alaska the term “Grizzly” refers to the smaller brown bears who live inland and mostly feed off vegetation (roots and berries), while the term “brown bear” refers to their bigger coastal cousins. Kodiak bears, often thought of as a separate species, are in fact coastal brown bears – they have been isolated from other inland populations for many generations, and as a result they often reach extremely large dimensions; that said, the genetic differences are not enough to declare them as a separate species.

Black bears are also found in most parts of Alaska in big numbers. They are mostly vegetarian and are especially widespread in forested areas. These guys are smaller than brown bears, and have different behavioral characteristics.

Whenever you go hiking in Alaska it’s important to remember that there may be bears in your area. That said, these guys are not man eaters. Attacks on humans are rare, with most of them occurring along the edges of human settlements, where bear-people friction is more common.

An average bear runs faster than a race horse, swims very well and climbs trees when necessary, so your best strategy is to avoid an encounter to begin with. Local folks in Alaska often claim there’s no point climbing a tree to flee from a bear: a black bear will chase you up the tree, and a grizzly will just take the tree down. Luckily for hikers in Alaska, almost every bear that hears or smells people approaching will quickly take off and disappear before anyone can see it.

Do and do not do

There are a number of methods to ensure that the local bear has noticed you. Generally speaking, anything that makes noise can work – clapping, shouting, singing your old camp songs – whatever floats your boat. Some travelers attach bells to their bags; while it might keep the bears away, it also annoys and bothers anyone else hiking in the area. Your choice

If you’re camping, make sure you don’t have anything in the tent that could arouse the bear’s curiosity – food, toothpaste, deodorant or anything else with a strong smell. Instead of keeping food in the tent, put it all in a bag and if possible, hang it on a tree about 350-650 feet from the tent.

Bear spray (which is essentially a very strong version of pepper spray) is available in sports stores throughout Alaska, and in many of the supermarkets, too. If an emergency arises, keep the spray handy and remember not to spray against the wind.

Overall, safe and smart bear viewing is a true highlight of any trip to Alaska; just remember to behave appropriately around these guys. 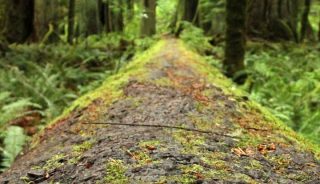 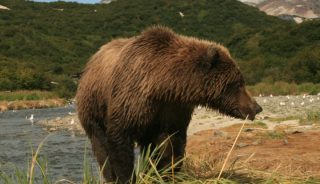